How Americans Have Fun

Thursday night’s adventures were notable in that the RV park in Paris, Texas, had only one bathroom. One bathroom for the whole camp. Not an outhouse and a shower house. A bathroom with one toilet and one shower in the same room. Now most RV’s have their own on board so that’s not an issue. Well, the Death Star does not have an on board waste elimination shaft. It was like 30 RV-ers staying in your Grandma’s yard while her second bathroom is broken. Then at about 11:30 at night, someone accidentally locked the bathroom when closing the door. No one who could fix it noticed until 6:30 the next morning. Jeff drove us into town (8 long miles) to use the Exxon station’s facilities.

We made an early start and a long haul with short breaks to get to Amarillo by 4. We called ahead to make Henry a bath appointment at the local PetCo. That way he could have something to do while the family went to The Big Texan, THE tourist attraction of Amarillo on Historic Route 66. These folks have made eating steak into a form of worship. Big steaks. Big skillets of fries. Big appetizer. And a steak-eating challenge: 72 ounce steak plus meal sides eaten in 60 minutes is free. We did not have any takers among the Fellowship. No hobbitses, I guess. And the restaurant also had only one unisex, shared-by-employees bathroom on the second floor where we were seated. The men’s room downstairs had accommodations for only two so there was quite the line. One would think an establishment dedicated to the copious consumption of undercooked (delicious) beef would have sufficient foresight to provide facilities equal to the task. Alas.

Henry was still at the doggie spa, so we went to Amarillo’s second biggest tourist attraction, Cadillac Ranch, a big, empty plowed field with nine ancient Cadillacs half buried, fins up, in a line about a hundred yards from the frontage road. Tourists bring spray paint and decorate. The layers of paint are so thick on the cars that the surfaces look organic, bubbling, almost diseased. The kids had an unforgettable time using spray paint doing legal nerd graffiti. Batman, Spiderman, the Watchmen, V for Vendetta, Sherlock, Doctor Who, though to tell the truth, “Bad Wolf” was there before we arrived (!)

Friday night’s RV park in Amarillo placed our grateful crowd very near the plentiful, clean, well-equipped bathrooms. Saturday we will push into New Mexico towards the Four Corners area. 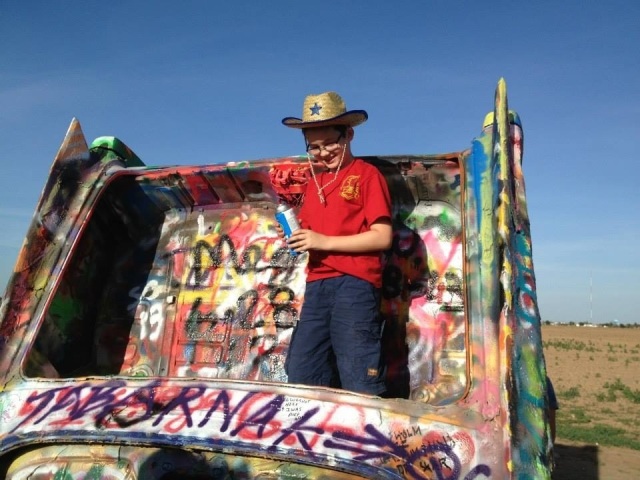 This entry was posted in On the Road and tagged cadillac ranch, the big texan. Bookmark the permalink.